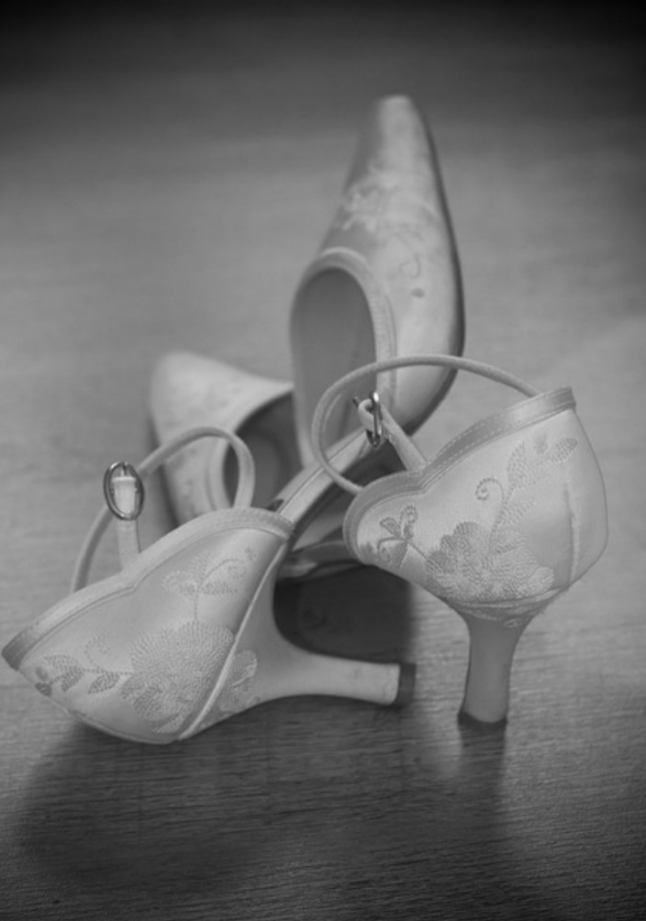 This is another unedited excerpt from my Camp NaNo project , ‘Calla.’

“I cannot believe you said that!”
Calla grinned, shrugging one shoulder.
“She shouldn’t have dared me.”
Calla’s grin was replaced by a dramatic eye roll when staccato clapping sounded behind them.
Neeri.
“Okay, Taylor Bridal Party! Prepare to join the bride and groom on the dance floor, please.”
Cherri’s face fell. “Do we have to wear shoes?”
Neeri shot the young girl a withering look. “Of course, you do!”
“Then we’re not dancing.” Mavis leaned back in her chair, done with the conversation.
“Of course, you’re dancing! It’s tradition! Tena is counting on you!”
“We’re done with you playing the Tena-card, Neeri.” Donna motioned toward the dance floor. “Look at her. She doesn’t see anyone or anything except Lloyd.”
The rest of the group nodded in agreement.
“A lot of time and money have gone into this event. I know you ladies will not ruin it by doing something as common as,” she raised her hand to her chest, “dancing barefoot?”
Fuming, Mavis smacked the table. “Common? Excuse me? That’s it! I’m not dancing!”
Cherri, Donna, and Calla all crossed their arms, daring Neeri to argue. Before she could speak, Tanya did, taking a different approach.
“Gilda, look around you. This isn’t New York or even Chicago. It’s Reedsville, Missouri, home to farmers and factory workers. You’re one of us and know we’re not common… we’re just small-town folk.”
The wedding planner bristled at the use of her birth name, but she was also fighting panic. The song was nearing the mid-point. She had to get the bridal party on the floor.
Smiling sweetly for anyone who might be watching, Neeri responded through gritted teeth. “Fine! Just please get ready.”
More staccato hand claps summoned the groomsmen from the other end of the table, and with all the flourish of a symphony conductor, Neeri directed the group to the dance to surround Tena and Lloyd.
Before Calla had cleared her chair, Gibson grabbed her hand, dragging her behind him. Twirling Calla around twice, Gibson pulled her into his arms, holding her closer and tighter than Calla thought necessary.
“Ease up, Gibby. This isn’t our wedding dance.”
“It could be, pretty girl. Just say the word.”
Laughing, Calla gave him a wary look.
“Gibby, you just delivered a beautiful, moving best man’s speech about love and how it continues to elude you. Don’t you know it will until you get serious and stop falling into insta-love with every female who crosses your path?”
“Ouch, Calla! Every female? Am I that bad?”
She answered with a smirk.
“Okay, okay. I love women. Sue me.”
Calla grinned. Gibson twirled her twice again, dipped her low and pulled her even closer against his broad chest.
“What if you’re the one? What if you’re the woman my heart’s been waiting for to share forever with?”
Laughter erupted so deeply from his dance partner Gibson felt it vibrating against his chest.
The sadness in his eyes halted her laughter.
“What do you want from a man, Calla?”
Without missing a beat, Calla Barrett looked over at Tena and Lloyd, still dancing, lost in whispers and kisses.
“I want that.”
Gibson pulled back, frowning.
“No, I don’t mean their love… but that kind of love. Unwavering, unbreakable.”
Gibson looked at his younger brother, understanding.
“Life and family didn’t make it easy for them, but you’re right. What you said in your speech. Their hearts bonded and withstood everything thrown at them.”
Calla patted Gibson’s chest.
“And that, dear friend, is how I know we’re not a match. I will be enough for the man meant for me. You, on the other hand, will forget about me as soon as this dance ends.”
Gibson laughed in spite of himself.
The song ended and Calla started for their table but Gibson grabbed her hand, stopping her.
“I know you’re right, Cal… but I do wish things were different between us.”
“Who knows, Gibby? Maybe in another life.”
Backing away from her, Gibson Taylor winked, turned, and headed straight for the group of women watching him from the dance floor’s edge.

When a potential book buyer clicks on your book link, where do they end up?

If you do, you have probably lost a great chance to sell a book because book buyers in the UK cannot buy books from Amazon US, and nor can South African buyers use Amazon UK.

Do you open publish? Yes? Great. But how do book buyers who use Apple iBooks or Kobo buy your book? Certainly not from your Amazon Kindle link.

Using one store link for your book promotion, such as to Amazon Kindle US, will work for US buyers, but what about the rest of the world? I know from experience, and my own book sales, that there are keen…