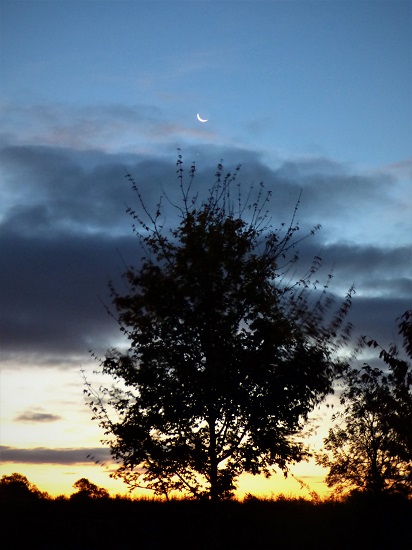 For visually challenged writers, the image shows the dark silhouette of a tree against a cloudy sky. The horizon is lit by the gold of dawn, while a crescent moon hangs above the tree.

Written for the #WRITEPHOTO WEEKLY PROMPT hosted by SUE VINCENT

Having a boss who yelled too much and coworkers who did too little, Gwen Foster closed her garage door, happy to be home and alone.

She walked through the mudroom, stepping over the food dishes and litter box.

Damn cat. Two-hundred-dollars for Morrie, his shots, food and toys, and one week after he became her new roommate, Gwen opened the front door to receive an Amazon delivery, and Morrie took off. A week of lost cat posts online and walking the neighborhood and she was still cat-less.

The Imperial March played on her cellphone as she entered her bedroom and Gwen tossed it on her dresser unanswered, refusing to go to the dark side. The last thing she needed right now was to hear her mother’s weekly lecture on how her biological clock was ticking. Maggie Foster knew if Gwen would simply call Charlie and apologize, he’d come back. What she refused to believe was Charles David Benson was a lying, cheating scumbag who only used a promise of a future together to get Gwen to help pay for his extravagant lifestyle. In Maggie’s mind, women did whatever was necessary to make their men shine.

She stopped long enough to kick off her black heels. She wanted nothing more than to shower away the film of office politics, difficult clients, and incompetent management that clung to her like a second skin.

Her gray pencil skirt and red silk blouse joined the heels somewhere on the bedroom floor. Gwen’s steps quickened, almost racing to the shower as her cell rang again. She turned the water on full force to drown out her mother’s persistence.

Grabbing a towel from the shelf, she threw it over the shower door then headed for her clothes hamper while removing her bra.

Catching her reflection, Gwen froze. The corners of her mouth twitched toward a smile as she caressed the small tattoo on her left shoulder.

Turning to get a full view, the world fell away as Gwen recalled a random vacation and a collision with another hotel guest in front of the elevators.

She could never explain it to anyone—although she’d never tried—but there was an instant connection with the man with the dark brown eyes. And less than an hour later, they were sitting in the hotel bar. They exchanged enough personal information to know she was Gwen; he was Gordon; they were both born in 1983, and neither was married nor had children.

They spent a perfect week together windsurfing, paddle boating, bowling, and exploring San Diego. Seaport Village was a daily stop for an oversized, four-dip waffle cone, just as each evening ended with walks on the beach under a waning moon. There was no mention of family or jobs or anything that existed before they met. This was their time.

On their last evening together, the couple strolled back to their hotel hand-in-hand after sharing a fresh seafood dinner. A light melancholy existed between them for the first time since they met, knowing it was time to check back into reality.

Gwen and Gordon weren’t in love or destined to be together. They didn’t share addresses or phone numbers or even take vacation pictures. But that week belonged to them. No one could ever take those moments in time away.

But when they crossed the street and found themselves in front of a dimly lit tattoo parlor, they looked at each other and grinned. Gordon looked up into the night sky and Gwen followed his gaze. She squeezed his hand, and when he returned his eyes to her, she nodded.

They went inside and told the grizzled old owner what they wanted. Used to inking skulls, devils, and flames, the owner—whose name was Bucket—scoffed, but dug through stacks of drawings until he found one they agreed on, and Gwen and Gordon parted the next morning with smiles, kisses, and sore arms.

She thought of him over the years, always with a smile and no regrets. Caressing the golden crescent moon on her shoulder, Gwen chastised herself for forgetting life was made up of moments, not just work schedules and family squabbles, or lost pets and dead beat boyfriends. They had their moments too, but the ones that counted were the ones that made you smile… like she was smiling now.