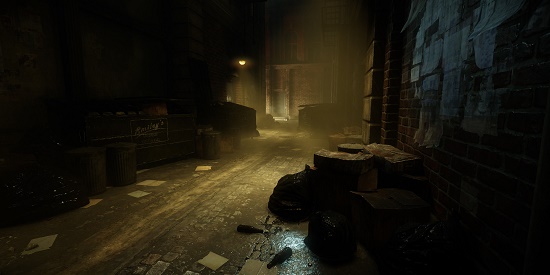 Camryn hated this part of her walk home.

She equally divided her attention between watching the shadowy alleyways and her footsteps. Used needles and condoms, broken liquor bottles, and random pieces of clothing carpeted the dangerous two-block section of 36th Street known as the Back Forty. Grown men avoided the area in mid-day. A woman walking alone just after six in the morning was asking for trouble.

But Camryn had to get home. She didn’t own a car and public transportation in this part of town started an hour later Sunday mornings.

Montgomery Clemens, spiteful, forty-six-year-old married father of five, knew this. Camryn had declined his offer of dinner and cocktails after work a month ago. Monty sought to punish her. As a human resource supervisor at Patterson Banking Systems, weekend scheduling fell into his lap every two weeks. It was a task he despised at first. Now, Monty saw it as a valuable tool he wielded to punish female employees who rejected him. Women like Camryn Evers.

Determined to beat Monty at his own game, Camryn said nothing and worked the bimonthly schedule changes in silence.

She didn’t have too. Camryn could have requested a hearing with the department manager and reported Clemens. However, Camryn was number three on the promotions list. It wouldn’t be long before Camryn was a member of management. When that happened, payback would be a bitch named Camryn Evers for Monty Clemens.

She could have bought a car. Camryn had more than enough money in either of her savings accounts for a car… and a home. But one of those accounts had been started long ago… when she was a different person. When her life revolved around the words of a man. Camryn trusted him. She loved him. And he’d lied and manipulated her. That would never happen again.

Fortunately, except for the dreaded two-block section of 36th Street, the seven-block walk home wasn’t that bad. The route was well-lit most of the way, crossing through metropolitan and residential areas. Traveling the edge of the Back Forty, however, filled Camryn with dread. Law enforcement made infrequent passes through the area. The one alternate route would add six blocks and forty-five minutes to her journey home. Camryn pushed on.

As she neared the middle of the second block, Camryn’s steps quickened-the bright street lights of Perry Avenue in view.

She froze. No one had ever called her by that nickname except family… and her girlfriends from high school. Despite her better judgment telling her to go home, Camryn turned towards the voice in the shadows. A tall figure leaned against the edge of a dilapidated building.

Even though Camryn couldn’t see the face, she knew the owner of the voice. In all her thirty-four years, Camryn had only known one woman who stood well over six feet.

“Yeah, girl. What are you doing here?”

The former best friends each took two steps forward. Belinda was now under a street light, and Camryn was stunned at the woman’s appearance. Once a mocha beauty, member of the homecoming court, and a standout player and captain of the girls’ basketball team, the years had not been kind to Belinda.

In a stain-covered dress far too short to be considered decent, Belinda leaned against the street light pole. A matted faux-fur waist coat and cheap, spiky shoes completed her outfit. Camryn couldn’t tell if it was a wig or weave, but the long chestnut curls framing Belinda’s face were matted. Camryn could also see traces of lint through the hair even from where she stood. But it was the tall woman’s face which took her voice away.

A mixture of wrinkles, acne, and bruises covered Belinda’s face. Camryn didn’t see an inch that wasn’t marred. Camryn’s gut churned when she reached Belinda’s eyes. While glassed over, her eyes were also empty, flat… dead.

Camryn watched her friend grip the light pole for balance. She didn’t know if Belinda was high, drunk, or both, but she was on something.

“Cammie? Did you hear me? Why are you here… in the Back Forty?”

“What are you doing here, Lindy?”

The altered woman glanced upwards as though she was expecting… and dreading the question.

Camryn’s hand clutched at her abdomen, trying to calm the rising bile. Sadness washed over her when she realized what the stains on Belinda’s dress were.

“Life is just a bowl of shit, Cammie, and shit happens. But get that look off ‘a ya’ face now. I don’t need or want anybody’s pity.”

“But Lindy, tell me something! What happened? You left the country with Lawrence after we graduated. You both signed to play ball in-”

“Men lie, Cammie. They do it on purpose. Always needing to control women. They say whatever it takes.”

“What about you and Raymond, Cammie? I knew you two would get the happily-ever-after.” Belinda didn’t miss the stricken look on Camryn’s face. “But if you were with him, you wouldn’t be out now walking alone, would you?”

“I’m so sorry, Cammie. You deserved better. You always were the best of us.”

Camryn waved her off.

“I was no better or worse, Lindy. We were kids, trying to grow up. Raymond covered up his true nature for a long time. But once I found out, I walked away.”

“See? Strength of character. You always had it, Cammie. Even with all the lies Lawrence told, the choices were still mine. I knew he was a liar. I chose to believe him. I chose to stay with him.” Belinda glanced away. “Until he didn’t want me anymore.”

“But Lindy, why didn’t you let me know? Or Cyn or Tammie? We could have-”

“Pride, Cammie… pride. I may not have much left, but I have enough to not want my girls from back-in-the-day to know how far I’ve fallen.”

“Listen! Do not come this way again. Back Forty’s no place for someone like you.”

“Bitch, we are not having a discussion!”

Camryn flinched at the woman’s tone.

Belinda stood to her full height and let go of the light pole. Though an imposing figure, her eyes softened.

“This is the third time I’ve seen you out here, Cammie. And, if I have… other people have too. People with black hearts and no souls who will do what it takes to get what they want.”

She motioned at Camryn with one hand.

“Look at you. Almost thirty-five but still with a school girl’s good looks. Thick, shoulder-length hair, perfect makeup, manicured nails. Morris is always giving me shit because I have no ass. Yours would have him salivating.”

The large woman turned and walked unsteadily back to the alley. She paused after a few steps and looked back over her shoulder.

“Cammie… please. Nothing good happens in the Back Forty and I want nothing bad to happen to you. If you keep walking this way… it will.” With that, Belinda Glass disappeared down the darkened alley.

Camryn stood frozen where Belinda left her. Her heart ached for her childhood friend. They had shopped for prom dresses together, prank called boys, and stolen cigarettes from their parents. Camryn knew she could help her friend. It wasn’t too late.

The sound of trash cans overturning and someone crying out startled Camryn. She knew Belinda had fallen. Camryn wanted to go to her and get Belinda out of this nasty, rancid place.

But instead, she backed away shaking her head. Tears were pooling in her eyes when she turned and ran towards Perry Avenue, not stopping until she reached the corner traffic light. The pedestrian crossing sign lit up, and Camryn made her way across the large thoroughfare, thankful for providence.

Camryn leaned against the post to catch her breath. Only then did she look back across Perry Avenue… and down 36th Street. Despite the rising sun, the outskirts of the Back Forty remained blanketed in darkness, untouched by the light of day.

They were once close as sisters.

Their lives had taken two very different paths… both lain by the lies of men.

Belinda accepted her empty life fueled by drugs and alcohol. Yet she wanted better for a woman she once called friend.

Camryn wanted it too.

She took a few steps from the traffic light and turned right onto Perry Place. Not for the first time, Camryn marveled at the difference in her tiny tree-lined street and the desolate wasteland only a quarter of a mile away.

By the time she reached the door of her street-level cottage apartment, Camryn had made two decisions. First, when the HR office opened at nine, she was calling off work for the next two or three days. Hell, maybe even the whole week. It would serve them right. Camryn had not had an unscheduled day off in almost three years.

There were only six senior account analysts, and while two had more seniority, Camryn was the one with the knowledge and skill. A week of scrambling without her would make them appreciate her more and receptive to her complaint about Monty Clemens. Because she would demand a hearing.

So caught up in her own head to not be manipulated by Monty… or any man, Camryn had played herself. Instead of reporting Monty, she fretted over a job promotion. She had put her life at risk… for a job promotion.

Belinda’s eyes continued to haunt Camryn as she entered her apartment.

She bypassed the living room, tossed her bag and jacket into a corner chair, and turned on the shower. She had enough time to squeeze in a quick nap before calling her job. Then, she would see if any of the numbers she had for Cynthia Kelly and Tamara Alsworth were still good. Camryn wouldn’t tell them about Lindy, but she wanted to touch base with them. The years had passed too fast, making the distance of a few miles seem even greater.

The rest of her day would be spent binge watching the programs stored in her DVR while she scoured the Internet for deals. Tomorrow morning, she’d take on the second decision she’d made.

It was time to buy a car.